This bugle is part of an incredible story.

Towards the end of the war, a soldier spotted a piece of metal partly covered with mud. It was this bugle inscribed "Presented by R.S. Warry, Maryborough, to 2nd Rfts, 42nd Btn, June, 1916". The soldier read the inscription and asked Stan Warry, who was standing nearby, if R.S. Warry was any relation. "He's my father". Stan replied.

Stan bought the bugle back to Australia and it was later presented to the Maryborough Central State School. Now on loan to the museum, the bugle is only removed to play the 'Last Post' and 'Reveille' at the school on Anzac Day each year.

The word 'furphy', which means a story of doubtful accuracy, originated in the Army camp at Broadmeadows, north of Melbourne in 1914, after the outbreak of WWI.

Water carts were used to deliver water to camp kitchens and latrines. The driver of the cart would be questioned by the soldiers as to the latest happenings and he would invariably be the carrier of camp gossip which would be based on rumours. Thus the word Furphy rapidly became a synonym for suspect information or rumour. 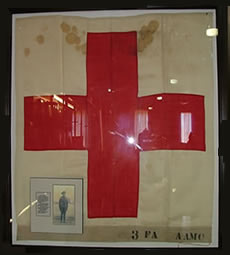 Private Joe Loth rescued a Red Cross flag after the tent was hit by Turkish gunfire at Gallipoli.

Joe was hit by the same shell and returned wounded to Australia. He later became a baker at Biggenden.

See the bloodstained flag and many items which he used at Biggenden.

It includes a breadknife with his business name which was given to customers at Christmas, his medals and needlework, by both his mother and his wife. 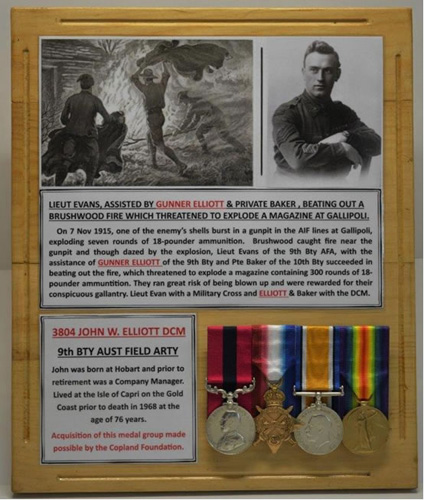 Private Martin was hit by shrapnel in the left side breast pocket of his tunic, in which he carried his razor, pay book, wallet and steel mirror. The shrapnel ball was deflected from his heart and entered the right side of his chest.

He returned to Australia and 10 years later had the shrapnel removed from near his spine in the Maryborough hospital.

See the display of the razor and other items with holes in them from the shrapnel and also the ball which was removed from Henry.

Will Warrener was nearly 21 when he enlisted at Warwick in 1915.

He arrived in Egypt on the 25th May, 1916 and he, and others, in the 5th Light Horse Regiment thinking they would not see any action, transferred to the artillery in order to serve in France.

In the last stages of the Passchendaele battles, Will was mortally wounded on 14th October, 1917. His first reaction was to write a farewell message to his family in his diary.

The blood (or mud) stained entry is on display at the Museum. Letters written by Sister Griffith who nursed him are also on display.

Read his final message to his family. See where a flower was pressed in the pages of his diary and left an image on the pages.

Lieutenant Colonel Claude ROSS MC was the last commanding officer of the 9th Bn AIF during WWI. He was born in this region and after the war was a local farmer and is buried in a war grave at the Maryborough Cemetery. Awarded a Military Cross for gallantry at the Second Battle of Bullecourt in 1917.