Director, John Meyers and a team of volunteers, headed by retired builder Darrell Blackley, worked for six months putting the room together at a cost of $40,000. Vietnam War hero Keith Payne VC AM officially opened the Gallipoli Room on 20th March, 2010.

According to John Meyers, the attraction contains the most significant collection of Gallipoli medals in the world. The room holds the medals of 120, mostly Australian, soldiers decorated at Gallipoli and the medals of 66 officers of the 507 Australians and New Zealanders killed there. Included is a prominent display in memory of Lt Col Lancelot Clarke, the oldest and only commanding officer killed on the day of the landing.

A detailed diorama of the Gallipoli battlefield allows adults and students to picture the actual landing.

The Midshipman Who Changed The Course Of The Gallipoli Campaign 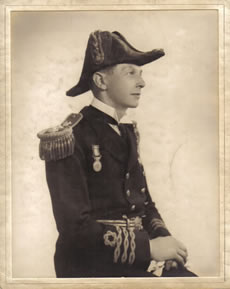 Significant medals in the Gallipoli Room are those of Midshipman (later Captain) JS Metcalf DSC, RNR. He was responsible for changing the direction of the picket boats that were towing the row boats ashore at Anzac Cove with 1,500 Australians aboard. This saved many lives because the original landing point was heavily fortified.

He commanded No.2 picket boat with troops from B Coy 9 Battalion, AIF at the initial landing from H.M.S. Queen to Anzac Cove before dawn, 25th April 1915. To protect the troops on his boat, he kept changing direction to the North away from Gaba Tepe, and the proposed landing site.

Awarded the Distinguished Service Cross and mentioned in dispatches (MID) for his gallant conduct on that fateful day. Later in the day he was wounded and removed to hospital. 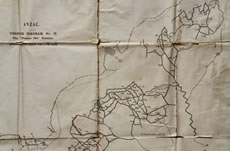 This map is unique – it is an original plan of 'Lone Pine' carried by Lieutenant H. A. Youden 2nd Battalion during the attack on Lone Pine (dated 07/08/15). 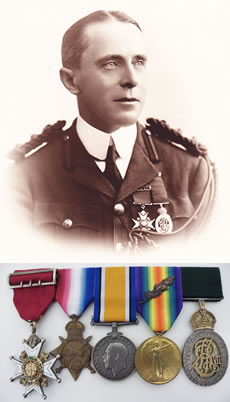 An extremely fortunate acquisition for the Museum is the significant medal group and memorabilia to Lieutenant Colonel (later Colonel) Richard Courtney, CO of the 14 Bn at Gallipoli. Courtney's Post at Gallipoli was named after this soldier who served on Gallipoli from 26th April to the 30th May when he was sent to hospital at Malta suffering with 'heart strain'.

With the medal group there is a massive amount of letters, photos, certificates and other memorabilia covering his service from 1883 until his early death in 1919. Courtney was commanding the battalion during the massive Turkish attack on the morning of the 19th May when the main thrust of the attack was against Quinn's and Courtney's Posts.

Roughly 3,000 Turks were killed with the 14th Battalion expending 23,000 rounds of ammunition in the few hours of the attack.