Keith Payne was born at Ingham, Queensland, on 30th August, 1933. He attended Ingham State School and later became an apprentice cabinet-maker. Unsatisfied with working as a tradesman, Keith joined the army in August, 1951 and was posted to the 1st Battalion, Royal Australian Regiment in September the following year.

Keith served with his unit in Korea between April 1952 and March, 1953. He married Florence Plaw, a member of the Women's Royal Australian Army Corps, in December, 1954, was promoted to corporal the following year and returned to operational duties when he joined the 3rd Battalion in February, 1960.

He served in Malaya with this unit and in 1965, now a sergeant, he joined the 5th Battalion. His next posting was as a WO2 to the Field Training Wing of the Officer Training Unit at Scheyville, NSW.

In February, 1967 Keith was posted to Papua New Guinea where he served with the 2nd Pacific Islands Regiment. He remained there until March, 1968 when he returned to Brisbane. On 24th February, 1969 he was appointed to the Australian Army Training Team in Vietnam.

In May that year he was commanding the 212th Company of the 1st Mobile Strike Force Battalion when it was attacked by a strong North Vietnamese force. His company was isolated and, surrounded on three sides, his Vietnamese troops began to fall back.

Keith, by now wounded in the hands and arms and under heavy fire, covered the withdrawal before organising his troops into a defensive perimeter.

He then spent three hours scouring the scene of the day's fight for isolated and wounded soldiers, all the while evading the enemy who kept up regular fire.

He found some forty wounded men, brought some in himself and organised the rescue of the others, leading the party back to base through enemy dominated terrain. Years later, asked whether he was afraid, Keith replied, "My God yes, yes, I was."

Keith's actions that night earned him the Victoria Cross. He was evacuated to Brisbane in September suffering from an illness, receiving a warm reception at the airport before entering hospital. In January, 1970 he was posted to the Royal Military College Duntroon as an instructor.

Keith received his VC from the Queen aboard the Royal Yacht, Britannia, in Brisbane. He was made a Freeman of the City and of the shire in which his hometown was located. A park in Stafford, Brisbane, where Keith lived, was also named after him.

He received the Distinguished Service Cross and the Silver Star from the United States and the Republic of Vietnam awarded him the Cross of Gallantry with Bronze Star.

He retired from the army in 1975, but saw further action as a captain with the Army of the Sultan of Oman in the Dhofar War.

Keith returned to Australia and became active in the veteran community, particularly in counselling sufferers of post-traumatic stress disorder. Keith, and his wife Flo, raised five sons and are now living at Mackay in Queensland. 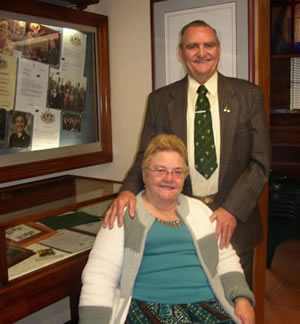 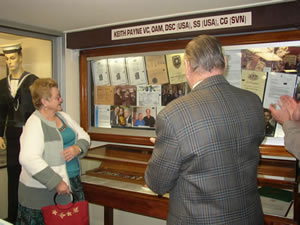 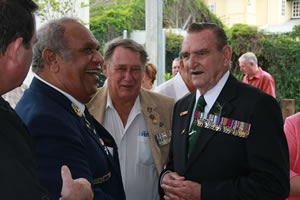 Vietnam veterans getting together at the opening of the Gallipoli Room – Buddy Lea, Reg Gillian, Keith Payne VC AM.